Slei Gill and the Floods

My volunteer work with the Yorkshire Dales National Park Historic Environment team gave me a keen interest in Industrial Archaeology, particularly the lead mining industry. About ten years ago I spent a lot of time photographing various features and identifying places on Grassington Moor for the National Park. Through that exercise  it has now become a hobby and I spend several holidays a year in Swaledale and Arkengarthdale with my archaeologist friend, Janis Heward, mainly visiting the lesser known lead mining sites and trying to work out such things as where the water came from to supply the hushes, drive the machinery and to dress the ore etc.  I had been photographing Slei Gill (one of my favourite places) extensively during a couple of visits in 2018 and was there again just a few days after the cloud burst that affected this area so much on 30 July 2019.

I was greatly saddened by my visit in August 2019 upon seeing the devastation which included tremendous destruction of some of the spoil heaps, walls that had been there for a few centuries completely demolished, disappearance of some of the official footpaths, green grassy areas resembling beaches and the gill re-routing itself. Another important factor is that the chemicals from the spoil heaps were washed down into the main rivers and I understand that a lot of my comparison photographs were sent to The Environment Agency and other similar bodies to show the extent of this pollution.

Slei Gill is a lead mining area near Langthwaite in Arkengarthdale about three miles North of Reeth and although it is not a scheduled site, it is nevertheless very important. Langthwaite and the hamlet of Booze which is situated on a steep hillside nearby, is where many of the Slei Gill miners lived. In just one mining accident, 18 miners from Booze lost their lives. In 1851 there were 41 houses/farms there and all that remains now is just one farm, four permanently occupied houses and three or four holiday cottages. Despite its name there has never been a pub in Booze and the origins of this name remain a mystery but perhaps the most likely of theories is that it comes from the norse word of ‘boose’, that as we know means a division or partition in a cowshed.

Slei Gill is home to several Hushes, and when seen from the air they look like great scars running down into the Gill (see aerial photo). The largest of these is named Tanner’s Rake Hush. Hushing is an ancient mining method where dams were created in narrow valleys so that when the gathered water was released it scoured the ground to reveal lead deposits below the soil line.

Marion suggested that during this unprecedented period, with normal life on hold, that I put together a few of the photographs I took.  I have selected a few from a Powerpoint Presentation that I cobbled together for the National Park. I hope that you find them interesting.

The comparison photos have been compiled with the before deluge (2018) on the left and the after ones (2019) on the right. It’s unfortunate that not all the comparisons are taken from exactly the same angle but I hope that you can discern some of the differences. 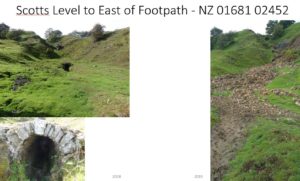 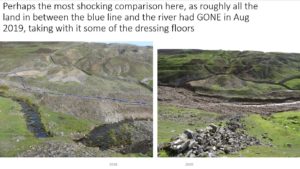 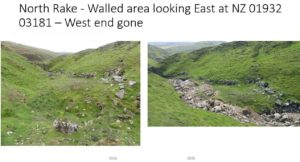 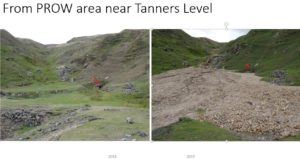 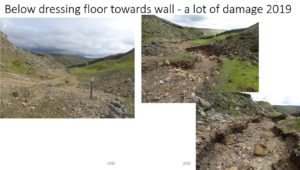 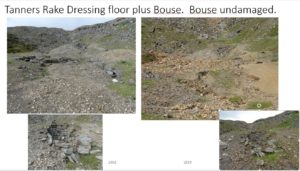 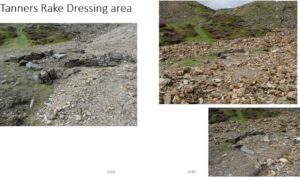 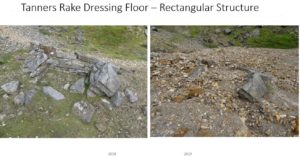 I have since re-visited Slei Gill and was heartened to see that a great deal of work has been done on the river bed and the gill has been put back to its original course where possible and the ‘new’ route that appeared during the cloud burst has been totally filled in.

It would be nice to think that some of the dressing floor remains that have been covered in spoil could be re-exposed using volunteers. However that is unlikely as there is so much to consider before that could happen, such as permissions and health and safety (working with toxic material), not to mention funding.

Such was the damage where the gill narrows that the public footpath (PROW) in some places was completely washed away and is probably impossible to replace, although luckily it is open access land so adventurous walkers can find a way through to the top of the gill using a different route.