The Society’s Walking Group chose a particular route for this occasion, as a tribute to our past long-standing member Jean Reinsch.  Jean organised walks for at least twenty-five years, and led a considerable number; was a team member of Dr. Arthur Raistrick in the early years with particular interests in geology, archaeology, history and caving.

Bearing in mind all these interests, one of Jean’s favoured areas was Ribblesdale, so our 8-mile circular route was from High Greenfield westwards, through forestry onto Ribblesdale’s Birkwith Moor.  (Seriously limited parking at High Greenfield required us to use the Community Minibus to carry our seventeen walkers to the start point, which proved very useful and popular.)  Unfortunately we had a rainy start and poor visibility so we were not able to see Pen y Ghent on our left and Ingleborough  ahead, but when we turned north onto the Pennine Way the conditions began to improve.   We approached Old Ing Farm on the ancient track which originated as the Hawes-Settle road, and here we were joined by members of Jean Reinsch’s family.  Just ahead was the rocky feature of Calf Holes where a stream falls 11ft. into the underground system leading to Brow Gill Cave. 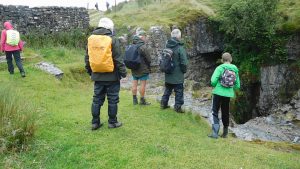 Despite much recent rain, there was practically no water running here.  The previous long dry spell probably necessitated the moorland’s absorption of rain before releasing excess.  Continuing along the track, with views opening up, especially to the west with Whernside, Simon and Cam Fells, the Ribblehead viaduct and post ice-age drumlins, the dramatic Ling Gill gorge was before us.  This steep limestone gill has been an SSSI Nature Reserve since 1958 and is home to many rare plants, over a dozen kinds of fern, and seventeen little caves.  It is also a rare example of sub-alpine ash woodland and many other indigenous varieties of tree.  Ling Gill’s ancient bridge spans Cam Beck, and an inserted plaque gives some restoration dates.

From Ling Gill we turned west to cross the very wet, prolonged and rough turf of Scald Bank, the ruined remains of old Ling Gill Farm to our left,  and  were very glad when we eventually saw Nether Lodge ahead, which was originally a Furness Abbey Grange.  The ruined 17th century farmhouse beside the current building would have offered hospitality to early travellers and traders.   Here we had lunch, in an improving afternoon of sunshine and clarity of landscape before heading southwards towards Brow Gill Beck and the interesting geological feature of God’s Bridge, a natural limestone bridge and tunnel.  (Perhaps a bonus near here was the sound then sight of a steam train crossing the Ribblehead Viaduct…).

The well-trodden turf track led us on to the junction of Three Peaks Way, Ribblesdale Way and Pennine Way, the latter of which we took, leading us past Old Ing Farm again and onto our initial route back to High Greenfield.

Back on the minibus, we stopped nearby for a sunny picnic tea, actually on the dry riverbed at Deepdale, and finally made for home.

We use cookies to collect anonymous visitor behaviour information to ensure that we give you the best experience on our website.
By continuing to use this site, we assume you are agree to our use of cookies.OK